Every day do your best, learn something new, and make a friend.

Miljenko “Mike” Grgich first gained international recognition at the celebrated “Paris Tasting” of 1976. Then, in a now-historic blind tasting, a panel of eminent French judges swirled, sniffed, and sipped an array of the fabled white Burgundies of France and a small sampling of upstart Chardonnays from the Napa Valley. When their scores were tallied, the French judges were shocked: they had chosen the 1973 Chateau Montelena Chardonnay, crafted by Mike Grgich,  as the finest white wine in the world. Mon Dieu! The results stunned the international wine establishment and immediately earned Mike a reputation as one of the greatest winemakers in the world. 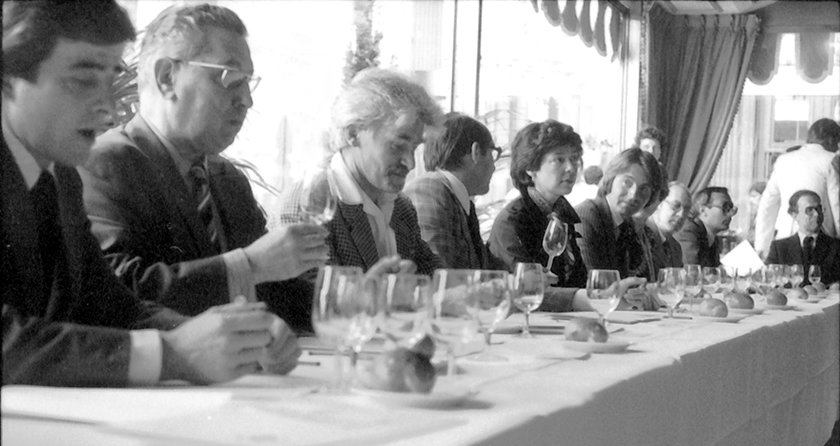 The Paris Tasting served notice to the world that the California wine industry was on the move, and it laid the groundwork for the creation of Grgich Hills Cellar. After his victory in Paris, Mike sat down with Austin Hills and his sister, Mary Lee Strebl, from the Hills Bros. Coffee family, and on Independence Day 1977, they gave birth to Grgich Hills. It was an ideal partnership. Austin owned premium vineyards in Rutherford, in the heart of the Napa Valley, and with his extensive background in business, he put the winery on its financial feet. Mike, with his fierce commitment to making wines of the highest quality, began producing what immediately became our signature wine: the exquisite, richly complex Chardonnays that win awards and delight wine lovers across America and throughout the world. When Miljenko “Mike” Grgich joined forces with Austin Hills in 1977 to form Grgich Hills Cellar, the original label design proposed a rearing horse clenching a baton in its mouth, a colorful feature of the Hills’ family crest. After some friendly debate over the label and how it should be redesigned to reflect the philosophy of the newly formed winery, the winning argument concluded with the point that “Horses do not make wine. Grapes make wine!” and thus, the current design was agreed upon. By 2005, Grgich Hills purchased enough vineyard acreage to source from its own vineyards. The label was amended to add the word “Estate” in recognition of this important milestone and in 2007 the name was officially changed from Grgich Hills Cellars to Grgich Hills Estate.

With 366 acres under our control, we source all of our grapes from our five estate vineyards.  As an “Estate Grown” winery, we are better able to control the farming and can utilize our organic farming practices for all of the grapes. Our goal is to create a balanced eco-system in our vineyard and allow the grapes to thrive with our natural farming. 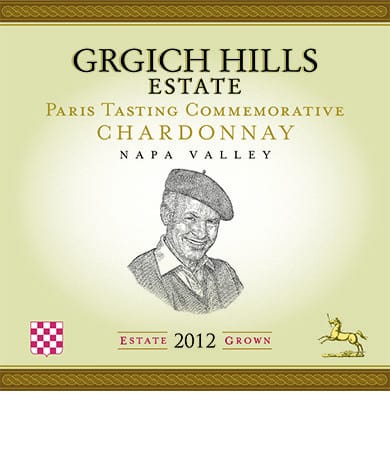 In 2013 the Legacy tier was introduced with the inaugural vintage of the Paris Tasting “Commemorative” Chardonnay. This tier celebrates our most rare and lauded wines and was introduced at Mike Grgich’s 90th birthday party on April 1, 2013.

The Chardonnay is joined by our Miljenko’s Old Vine Zinfandel, Yountville Old Vine Cabernet Sauvignon, and Violetta Late Harvest. These bottles boast this unique label  based on a woodcut image of Mike Grgich and a traditional Croatian gold braid design. These wines are exclusively sold at the winery and many are reserved just for members of our wine club. The 1973 Chateau Montelena Chardonnay crafted by Miljenko “Mike” Grgich that was the champion of the 1976 Paris Tasting is part of the exhibit selected by the Smithsonian Institute as one of “101 Objects That Made America.”  Chosen from 137 million artifacts in the Smithsonian collection, the Chardonnay is joined by other iconic American objects such as Abraham Lincoln’s hat, Alexander Graham Bell’s telephone and Neil Armstrong’s spacesuit.

The Smithsonian’s History of America in 101 Objects chose Julia Child’s Kitchen, which includes the 1973 Chateau Montelena Chardonnay crafted by Grgich, in a major exhibition on the revolution in American wine in the second half of the 20th Century, and the book features a photo of the winning wine. The author, Richard Kurin, is the Smithsonian Institution’s Under Secretary for History, Art and Culture, selected objects from the entire collection held by the 19 museums and research centers of the Smithsonian Institution.

Looking over the list of 101 treasures from the Smithsonian’s Collection, Grgich commented: “When I was growing up in the little village of Desne in Croatia, I never would have dared to dream that my wine would be in the same book as America’s “Declaration of Independence,” or in the same museum as Nikola Tesla, the famous inventor who is also from Croatia. When I arrived in the United States, I thought I was the luckiest man alive to have my dream come true of making wine in California, but this recognition far exceeds my American Dream.”

The flavor of wine captured in the wine glass starts with the grapes which are fed by the nutrients found in the vineyard soil.

The concept of terroir is rooted in the idea of place. Organic farming allows the land to be unadulterated, thus the wine will show the true essence of the vineyard.

Great wine begins in the vineyard. As a farmer you want to do right by the land and be proud of what you grow and produce.

A healthy, organically grown vineyard is far more profitable in the long-term. Vineyards that are not chemically farmed can survive longer, providing fruit for decades.

You have to feed cows every day, it’s a no brainer, but we never think about feeding microbes. So you have to feed them and in return they work with plants. Enjoy 50% off overnight Safe Summer Shipping on your order of 12+ bottles to celebrate the end of summer!